The CORE project produced a number of tools that can be reused or adapted to solve specific problems. In this blog post, we are going to explain how do we envisage this to happen and describe how can our team assist. Some of the answers were developed during the last Advisory Board meeting that took place on Monday 25th July.

1) Development of subject based repositories as aggregations of content from a set of existing Open Access repositories – the CORE harvesting software can be easily set to perform metadata and content harvesting from any set of OAI-PMH compliant repositories. The fact that CORE provides access to the full-texts enables us to apply different text mining and classification methods to filter the content to be finally presented to the user. read more...

The development of the CORE system has been rapid and we were overcoming issues at a daily basis. It is just now, when the CORE system is fully functional, when we can evaluate the successes and comment on the issues we had to face.

Let us first start with the challenges we were facing to and explain how we addressed them:

Overall, we are glad to say that we were able to recover from all the major issues we have encountered. We found it it extremely useful to develop and test the system on a daily basis using agile development methodologies. The proof of the very active development and involvement of the CORE project team is that today we have already 575 code revisions in our SVN repository since the project start. read more...

The project team has submitted a paper describing CORE to the International Conference on Theory and Practise in Digital Libraries (TPDL 2011) – http://www.tpdl2011.org/ to be held in September in Berlin. This conference is the main scientific forum on digital libraries in Europe. The paper has been accepted and the acceptance rate for this year was 33%.

We provide an overview presentation of the CORE project.

The first version of the CORE dataset been released yesterday and registered in the Linked Data cloud (http://ckan.net/package/core). The CORE project exposes data about similarities between papers in the Open Access domain. We are providing links to the OAI repository. The similarities are calculated using Natural Language Processing techniques based on the full-text. This distinguishes CORE from other systems, such as Mendeley or MarcXimiL. The similarities are provided only for research articles with an accessible and machine readable full-text. read more...

To demonstrate the capabilities of CORE, we have developed a mobile application for the Android system that allows navigating and downloading content harvested from Open Access repositories. The application is freely available and downloadable from the Android Market. It works both on SmartPhones and table devices. This allows anybody to read their favourite research articles offline when travelling. 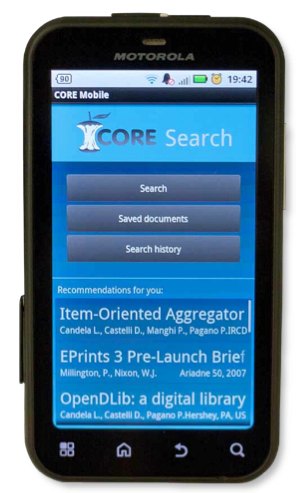 It is not even a week to go, until CORE will be presented at the OAI7 Workshop in Geneva. This will provide networking and dissemination opportunities. CORE is now in the phase of heavy testing and bug fixing. We are working towards being able to roll it out to more repositories and are including more data frequently. The poster presents the main objectives of the CORE system and the three applications developed on top of CORE, i.e. CORE Portal, CORE Mobile and the CORE Plugin. While the first two applications are already operation the last one will be released by the end of July. The CORE poster can be downloaded here. read more...

CORE has been accepted for a presentation at the CERN Workshop on Innovations in Scholarly Communication (OAI7). OAI7 ( http://indico.cern.ch/conferenceDisplay.py?confId=103325 ) takes place in June in Geneva. OAI7 is one of the most important events in the Open Access publishing field. It is aimed at those involved in the development of Open Access (OA) repositories and those who can influence the direction of developments either within their institution, their country or at an international level – that includes technical developers of OA bibliographic databases and connected services, research information policy developers at university or library level, funding bodies concerned with access to the results of their research, OA publishers,and influential researchers keen to lead OA developments in their own field. read more...

In the last weeks we have invested a significant effort in the development of CORE administration tools. These tools will allow an easier maintainance and analysis of the metadata and full-text content flow from Open Access repositories to CORE. It will also enable the inclusion of more Open Access repositories in the future. The approach we are taking is that after the end of the project we want all the regular maintenance tasks to be performed directly from the user interface without requiring the administrator to have any knowledge of the source code. We believe that this is an important step towards sustainability of CORE.
read more...